Peaceful prayer vigils have been held outside West Australia’s abortion clinics for nearly 20 years. These vigils have seen at least 54 women decide not to proceed with an abortion.

The abortion industry loaths these vigils and have made repeated claims – without any evidence from their extensive security camera systems – that ‘demonstrators’ cause problems by obstructing entry to their premises, harassing and intimidating people accessing abortion clinics. If it were true, WA police would have made arrests. But police admit that the prayer vigil participants have been exemplary in their conduct.

But now the McGowan Labor government is moving to shut down these prayer vigils.

During the public consultation before drafting the legislation, the Department of Health (DoH) reported that it had received over 500 submissions stating that many women are forced, manipulated or coerced into aborting their unborn child. This is a form of domestic violence which often has life long mental health consequences.

The DoH consultation report reluctantly admitted that some women had written in to say that they had appreciated the ‘demonstrators’ presence, as they had offered the help they needed to help them decide to keep their baby!

If this Bill passes, it will be a criminal offence to communicate directly (speaking, offering a leaflet) or indirectly (such as placards, or a sign on a car) about abortion with any person who is accessing or leaving an abortion clinic in a manner that is likely to cause distress or anxiety. As a person can claim that seeing someone praying can cause them anxiety, this Bill is designed to shut down the prayer vigils.

The required police permits obtained by the vigil organisers already stipulate that participants must not be within 4 metres of the driveway entrance to the abortion clinics, which guarantees that staff and clients can enter unhindered. The Bill also prohibits the recording and publishing of recordings of persons accessing an abortion clinic. Police already have the power to make this part of the permit conditions.

The Hasluck Women’s Division successfully moved a motion at the Liberal Party state conference, which is the voice of the lay party, calling on the parliamentary Liberal Party to oppose the introduction of ‘buffer zones’ around abortion clinics.

For the sake of the women who are coerced, manipulated or forced by others to abort their child, we are asking you to write to your State MPs to remind them that this Bill is unnecessary. All the evils which the Bill is supposedly to prevent, police can already deal with under existing legislation. 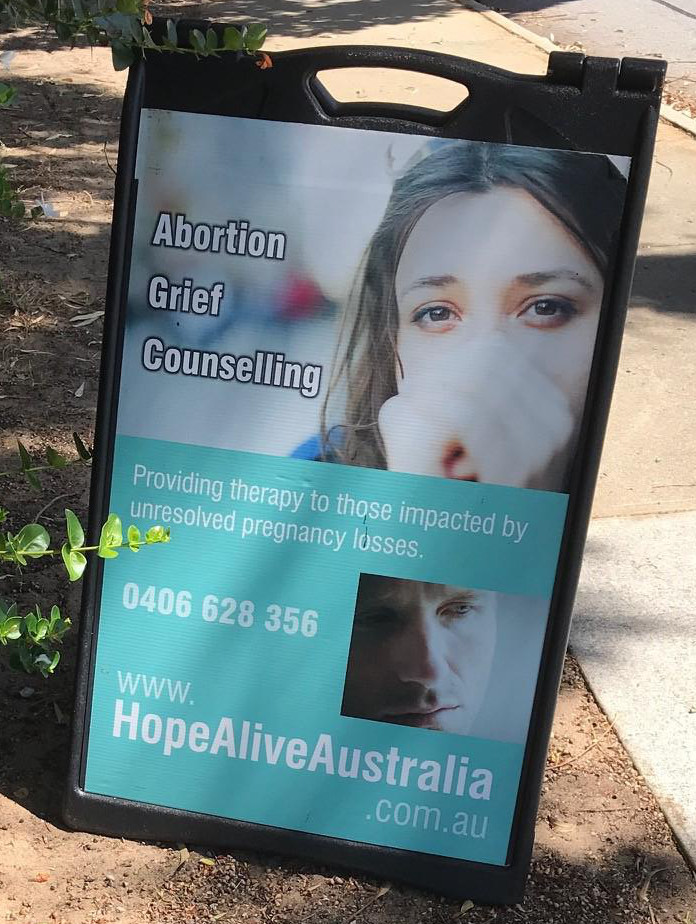 Will this sign be in breach of the Government‘s safe access zones legislation? You may think it is not ‘reasonably likely to cause distress’ and put it out on the verge. But if a court thinks otherwise, you can be fined up to $12,000 and jailed for one year.

Hanson calls for inquiry into use of puberty blockers for children

The Australian Christian Lobby has congratulated Senator Pauline Hanson for her Senate motion calling for an inquiry into the use...

‘I want to know more about this Jesus’

A man from a non-Christian background found his curiosity awakened when his daughter started attending a Christian school in Geraldton...