Fiona Patten tabled her Anti-Vilification Bill in 2019, seeking to amend the existing Racial and Religious Tolerance Act 2001 to include a few protected attributes such as gender identity and sexual orientation, while lowering the bar to define vilification.

The bill did not pass the Upper House but went into Committee inquiry. After months-long consultation and hearings, the Committee released its report on March 3. 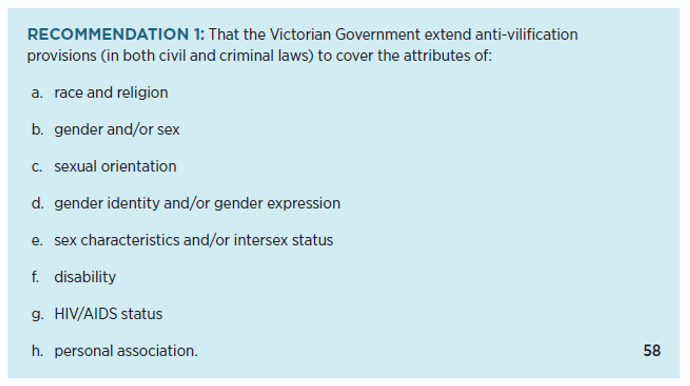 To add salt to the wound, the Committee recommends to lower the bar to define vilification and incitement from ‘conduct that incites’ to ‘conduct that is likely to incite’.

Like the Change or Suppression (Conversion) Practices Prohibition Bill 2020, the Committee has recommended to give the Victorian Equal Opportunity and Human Rights Commission the power to oversee these new regulations.

If these recommendations are adopted by the Andrews Government and made into law, the religious freedom and free speech of Victorians will be put at greater risk.

Christians and people of various faiths and cultural communities could be restricted in expressing their beliefs about gender identity and sexual ethics, both verbally and online.

Additional restrictive legislation is also on the horizon, including the Gender Equality Act 2020 and the Victorian LGBTIQ Strategy.

Recently, many ACL supporters have been briefed on the social and political developments in Victoria and how we can make a difference together. Please come to events near you – and bring a friend – to help protect religious freedom and the future of our children.

Human rights would be crushed by Victorian MP’s hospital demands

Founder of the Sex Party, Fiona Patten, is calling for the Victorian government to force religious hospitals to add abortion and...

Reports of distraught parents facing prosecution under Victorian law for failing to agree to potentially harmful treatments for their children including...

The blessing of the gospel campaign

‘The Word became flesh and made his dwelling among us. We have seen his glory, the glory of the one...

Is this the most diabolical form of coercion?

Allegations that an Indigenous Hawthorn Football player and his partner were coerced to abort their baby shocks every reasonable Australian, but it...