More Victorian worshippers back at church!

Finally, Victoria is free! You no longer need to wear a mask outdoors unless social distancing is impossible. The border between metro Melbourne and regional Victoria has been lifted.

Most importantly of all, more Christians can return to church!

Starting from this Sunday churches will be able to have 150 worshippers indoors, in parity with hospitality and entertainment venues.

This is a big step forward from previous weeks and it took a concerted effort to achieve.

For instance, in October…

Though churches were allowed to open for indoor worship on 20 October, the disparity was obvious. ACL continued to push for fair and equitable treatment for churches, sending the Premier and the Opposition Leader the petition and the letter.

Finally, it was announced on 22 November that churches can now open for 150 worshippers indoors and 300 outdoors.

I would like to congratulate you for your effort and thank you for either signing the petition or letter in this lengthy and laborious campaign. This wouldn’t have been achieved without your support and participation.

This campaign shows that concerted effort is important, and unity is paramount. When believers stand together, they create people power that can move mountains!

This is the reason why ACL is committed to building a grassroots movement of Christians to impact our society and our nation by making truth public.

I pray that we’ll continue to stand together, and I look forward to further opportunities to work with you in Victoria to defend our Christian values and protect our children. 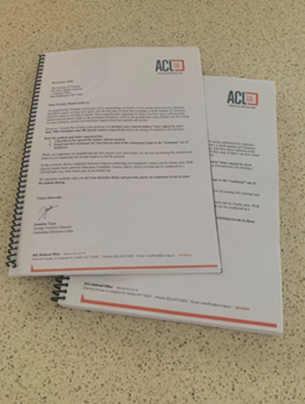