The promised bill is a valuable first step in acknowledging the importance of faith in the lives of the majority of everyday Australians and affirming the principle that religious people and the organisations they form should not be discriminated against.

Helpful reforms in the bill include:

However, the bill does not address some of the flashpoints for religious hostility in the real world such as:

We hope that this bill can be improved in 2022. There will be a further consultation process in the Senate, and we will take that opportunity to make further recommendations for improvement.

As we approach the 2022 Federal election, we are heartened by Labor’s platform which recognises “the right of religious organisations to act in accordance with the doctrines, tenets, beliefs or teachings of their faith” and that, “such rights should be protected by law and be subject only to such limitations as are necessary to protect fundamental rights and freedoms of others.” 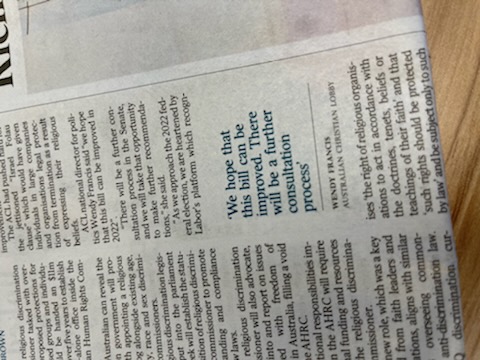 Controversial recommendations by the Queensland Human Rights Commission (QHRC) would remove the right of Christian schools to exclusively hire teachers...

The blessing of the gospel campaign

‘The Word became flesh and made his dwelling among us. We have seen his glory, the glory of the one...

Is this the most diabolical form of coercion?

Allegations that an Indigenous Hawthorn Football player and his partner were coerced to abort their baby shocks every reasonable Australian, but it...