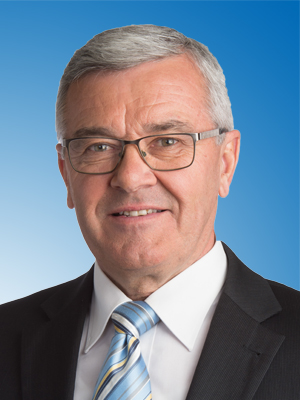 I have been married to Johanna for over 45 years.  I have two adult children who are both medical professionals and two wonderful grandchildren.  I have worked as a high school teacher, teaching woodwork and metalwork, and spent over twenty years working as a veterinarian, much of that in my own practice south of Adelaide.  I entered politics in 2002 as the Liberal Member for Morphett.  I am now standing as an Independent candidate in the 2018 state election.

One of the main concerns that I know my constituents face is the rising cost of living, so reducing the cost of living is vital.  My priority is to reduce government taxes and levies and the cost of utilities – electricity in particular.  The other big outcome that I want to achieve for my constituents is for them to be able to have reliable, prompt and good quality access to all government services, whether that be education, health, police, the justice system or any other services provided at government levels.

The need to provide safe surroundings for our children, both at school and at home, is paramount, as is the need to give a balanced view of life.  While we do have a diverse range of both cultural backgrounds and lifestyles in South Australia, it is important that no particular group be given any precedence or advantage or is able to influence more than any other.  There needs to be a significant balance and programs such as the Safe Schools program I think are not as balanced as they could be.

Any program that is introduced to our schools to inform and educate children on matters such as those raised in the Safe Schools program and supporting same sex, intersex and gender diverse students policy is something I think needs to be dealt with in conjunction with the parents of the children.  If there are particular concerns or objections the parents have I don’t believe that those concerns or objections should be in any way discounted and the parents should have the ability to stop their children attending these courses.  We do need to maintain a balance of ideas.

From the knowledge I have of the Nordic model to decriminalise prostitution, I don’t believe it is the complete answer for the problems we have here in South Australia.  The legislation that has been put to the Parliament by the former Member for Ashford Hon Steph Key and the Hon Michelle Lensink in the Upper House I think was a good balanced approach.  However, if further evidence is provided I may be persuaded to look at other options.

I can say that, as a strong proponent of the right to choose when it comes to voluntary euthanasia here in South Australia, I will not be walking away from my views on this, as I know many Christians are also supportive of this, including some of my church ministers in the seat of Morphett.

Even with my very strong views in support of voluntary euthanasia, it is absolutely vital that all South Australians be given the highest levels of palliative care possible.  I have written to Palliative Care SA saying I am happy to support their $24 million claim for improvements in the sector and certainly will be working very diligently to make sure that palliative care is a real option for all so that everybody in South Australia has a dignified death.

The scourge of both legal and illicit drugs in South Australia is something we all need to address, whether it be alcohol related, prescription drugs or illicit drugs.  To pretend that we have control over this or are winning the war on drugs is an absolute furphy.  The need to overcome the scourge of drugs in society may in some cases require a level of government control through the decriminalisation or legalisation of the possession of small amounts of drugs that would then enable not only policing but also information gathering about drug taking in South Australia.

I understand that in some European countries this particular legislation considers 23 weeks’ gestation as the cut-off point.  I will be guided by medical practitioners as to where we as politicians should go under these circumstances.

Yes, I do support faith-based organisations’ right to, if they so choose, restrict employment or enrolment to those who share their ethos.

The need to help problem gamblers in South Australia and ensure that people don’t go down the path of becoming addicted to gambling is I believe not a government responsibility but just as important for the operators of betting and gaming facilities.  The firsthand interactions with problem gamblers is in the premises where gambling is undertaken and so I think the operators of these facilities should be the ones that are primarily responsible for gambling.  If a restriction on betting types and frequencies is also an assistant, then I think this could be considered.

I would like to be remembered as a hard working local member who listened to all his constituents, acted on their concerns and was seen as their voice for their collective conscience.  I see myself not as a delegate but as my constituents’ representative and will continue to act that way so I do hope that I will be remembered as having been a diligent representative for the people of Morphett.