For those unfamiliar with the event, Dark Mofo (don’t look up the clearly offensive meaning of MOFO) is an offshoot of Hobart’s MONA Museum (Museum of Old and New Art).

The museum was set up by millionaire art collector and professional gambler David Walsh as a ‘secular temple’ and ‘subversive adult Disneyland’ with its central themes of sex and death.

Unsurprisingly it is renowned for its controversial exhibits.

The Dark Mofo event each June is aimed to revitalise an otherwise dreary Tassie winter through ‘celebrating the dark’ of the winter solstice.

Last year one of MONA’s curators revealed in a media interview that their aim was to change the culture of Hobart over 10 years. The goal, he said, has been achieved ahead of time so now they are looking northward. Why do I get the feeling he was talking about more than just art?

And who gets to say what culture should look like anyway? Government? Artists? Business Tycoons? The Church?

Jesus made it pretty clear about Christians’ role in being salt (enhancing/preserving) and light (purifying and enlightening). It is obvious we have some stiff competition. As someone has rightly said, whoever wants the next generation the most will get them.

Since the first event in 2013 Dark Mofo has been increasingly characterised by satanic content. Last year’s programme included blood sacrifices, mock crucifixions and blood drinking – all in the name of art. This year one of the headline metal bands has as its advertising caption; ‘Lucifer I summon thee to my black mass.’

With all this in mind we come to this year’s major controversy - the issue of upside down crosses.

Some have suggested we should be interpreting these positively as the deeply symbolic and meaningful cross of St Peter (Google it if you want to know more).

In context however, this is obviously not the intention. They’re clearly aimed to provoke and offend. Tasmanian Anglican Bishop Richard Condie’s description of ‘state-sanctioned blasphemy’ sums them up succinctly.

This should not surprise anyone – there is an obvious anti-Christian sentiment, some would even say a blatant mocking, behind much of what MONA conveys.

David Walsh himself has a carparking sign at MONA stating he is ‘GOD’ and his wife ‘GOD’S MISTRESS.’ 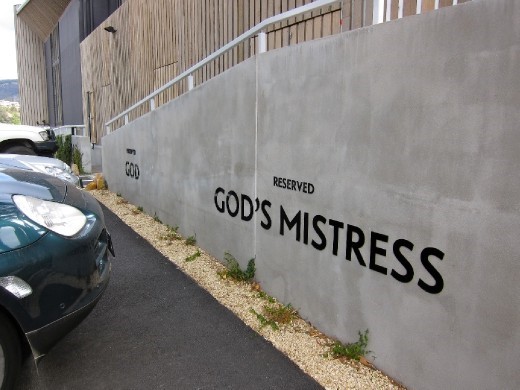 How should we respond when such events, either deliberately or unwittingly, are opening the community to potential harm?

Yes, we live in a secular culture, but does that mean we blindly ignore spiritual realities and dangers? ‘We wrestle not against flesh and blood...’ Can we dabble in the demonic without being devoured?

Yes, we all value free speech but how far is too far in the name of art?

Is this really what we want Tasmania to be known for?

Encouragingly, various Christian groups in Hobart are deliberately programming ‘light-shedding’ events at this time each year: ‘…even the darkness is not dark to You’

Sadly though, most leaders in the community appear to be too afraid to speak negatively against the sacred (cash) cow that is MONA. Tasmania’s tourism boom has been clearly linked to MONA’s success.

Tasmania’s Premier Will Hodgman, who is also the Tourism Minister, would have had his fair share of anti-Dark Mofo’s correspondence.  As yet though he appears happy to continue publicly supporting the event as well as giving $2 million per year of taxpayer’s money to ensure its success.

There are numerous questions that remain unanswered or unasked by the media that have been actively promoting MOFO (a number of major media outlets are actually event partners).

Would it be acceptable to mock other religions in the way this event mocks Christianity?

How dark is too dark for our state government?

Is the government’s duty to pursue peace and the common good being upheld with this enthusiastic re-embracing of paganism?

I encourage everyone concerned about the trajectory of Dark Mofo to write to the Tasmanian Premier and his government, the Hobart City Council and Mona itself. (email addresses at the bottom)

‘Not to speak is to speak’.

Without this, as well as a diligent focus on prayer and increasingly bright light-shining responses, the MONA culture shaping will roll merrily on.