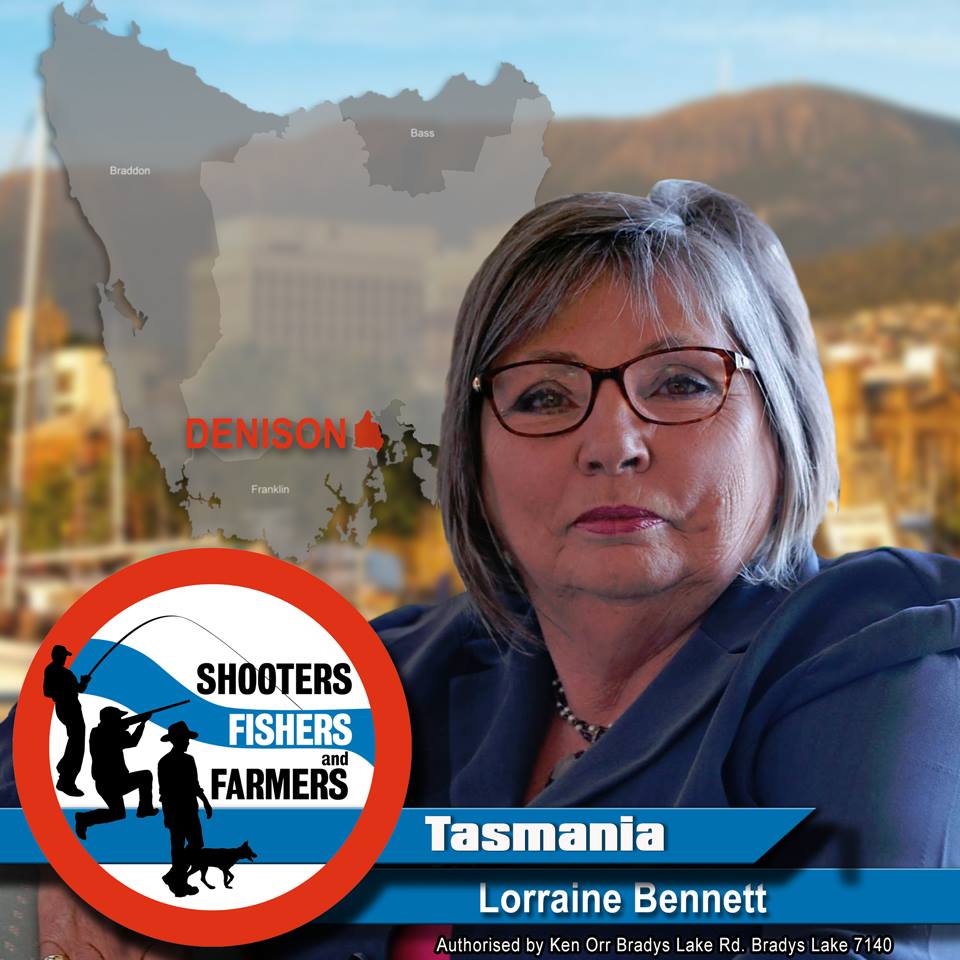 Ran my own recruiting company for 10 years, company was merged with another company, where I was employed for another 5 years. I am recently retired and wanted to be involved in shaping our state. Hence joining the Shooters, Fishers & Farmers Party Tasmania.  I have been state secretary for 2.5 years and now am a candidate for Denison.

On a personal level I don’t know how anyone can let a terminally ill person suffer unnecessarily. Having said that, should this be a government decision or a decision between drs and families?  Our party will vote on this as their own conscious dictates.

Deciding to take/or not to take Drugs is a personal choice.  The issues as I see it is we the public have to pick up the pieces of shattered lives of the hardened drug users.  We have found in the past making legislation to ban something does not stop the problems.  All it does is fill our courts, gives lawyers a job and fills our coffers in the way of fines (if they pay them) and fills our jails which again the man in the street pays for. Educating the public is how we need to address this issue.  Not one campaign, ongoing education capturing each generation until it becomes a norm not to use drugs.  I am against “safe shoot up rooms” rather give the pensioners who have paid taxes all their live free medication in their twilight years.

What an emotive issue.  I feel I cannot answer this question as I have not walked a mile in the mothers’ shoes who feel this is their only option.  This would be a conscious vote.  However, on a personal level I oppose late abortions with exceptions as noted above.

Our young children are at school to learn and expand their knowledge, they have an open mind and will take on board what an adult says.  My concerns are the wrong message may trigger wrong responses adding confusion for the child.  If this program was directed to an older group mid-teens and be open to those who feel a need for the program.

We do have a gaming policy, we feel it is a personal choice to use gaming machines.  Having said that we don’t want to ban them.  Rather we would like to work with the addicted people to help with their mental health issues that cause addiction.  If the gaming machines are removed the addicted person is still addicted and will turn to on line gaming.  In this instance they will become more isolated and we cannot fix what is hidden.  Also, the money goes overseas.

I feel the Nordic approach is fair and reasonable in short as a candidate I support it.

I would like to be remembers as one who thought long term (25 years) into the future by planning for population growth.  Planning for energy requirements, alternatives, housing and food. Rather than making a big splash in four years.