Marriage has nothing to do with children, apparently.

As the dust settles on the knife-edge 2016 election and the Prime Minister tweaks his cabinet, media focus has turned to the timing of the marriage plebiscite.

Last night on ABC1's 7:30 program, Mr Turnbull said it was unlikely the people's vote would be held before Christmas, as he had previously indicated. Early 2017 is now firming.

In the past three weeks, I have been involved in two debates with activists from Australian Marriage Equality, the peak body seeking to change the definition of marriage in law.

Tiernan Brady helped run the Irish referendum which redefined marriage there. When I mentioned the connection between marriage and children he became visibly uncomfortable and tried to assert same-sex marriage has nothing to do with children. "It's all about love", is his mantra.

Tiernan has been more forthcoming on social media, as this Twitter exchange with my Irish friend David Quinn last February where Tiernan directly indicates the flow on effect that came with the yes vote in Ireland’s May 2015 Referendum.

Surrogacy is ethically problematic and "marriage equality" for two men cannot be achieved without lifting Australia's prohibition on paying women money for this service.

Sperm donation is also unethical, especially anonymous sperm donation. Children have a right to their ancestry.

On Sky on Sunday night I debated the co-chair of AME, Alex Greenwich.

Again, I was told children have nothing to do with marriage, despite many same-sex marriage proponents pushing for commercial surrogacy to be legalised so two men can get babies.

Sure some marriages don't produce children but every child has a mother and a father, somewhere.

The government has no business regulating our friendships or love lives. But the reason marriage law exists is because governments are rightly interested in protecting the rights of children.

The purpose of marriage law is to provide a legal and cultural incentive for men and women who produce children to stay together for the benefit of those children.

People are free to love whoever they want, but changing marriage law has the consequence of changing our legal and cultural assumptions about mothering and fathering.

Same-sex marriage makes it impossible to assert that children, wherever possible, should be allowed to be loved and nurtured by their biological mother and father.

Sure children miss out because of tragedy or desertion. But government policy should not mandate this.

Sure, two women or two men can love a child and be great parents.

But are we ready to use the law to assert that mothers don't matter to babies and that fathers are optional extras?

The AME crew are quite disingenuous. Their preference is to scrap the people's and vote and rush same-sex marriage law through the parliament where they know politicians who have not thought deeply about the consequences will vote on the basis of "love" and "equality" while being blind to the love and equality they deny children.

Pushing the people's vote into 2017 gives us time to continue to make the case to the Australian people that there is much more to same-sex marriage than we are told.

Alex Greenwich said of me that using the children argument meant I had no argument against same-sex marriage and had thrown in the towel. 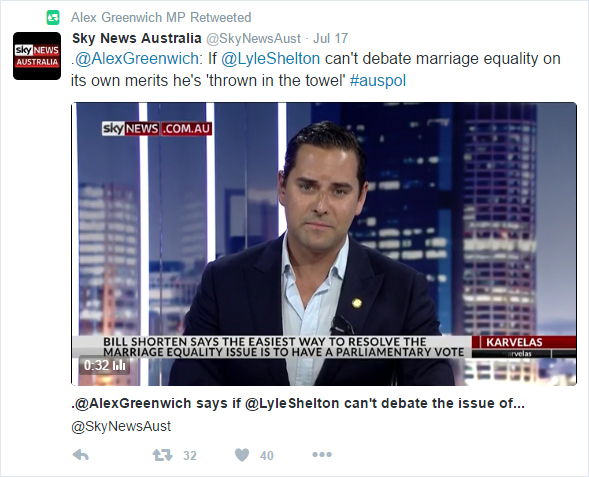 Nothing could be further from the truth. This debate is all about children and their right to their mother and father. It is only just beginning.