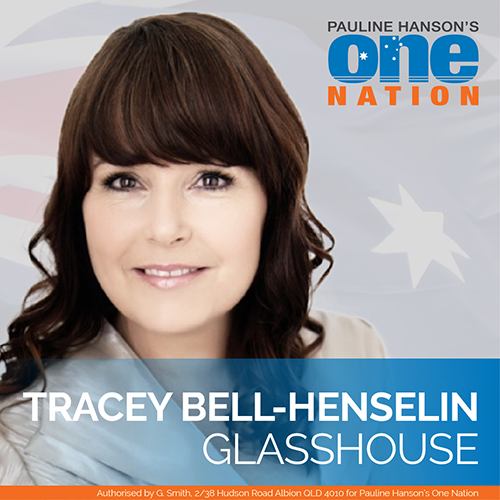 One Nation will remove Safe schools from Queensland and refuse any funding to keep it going.

One Nation allow their members a conscience vote on abortion.

One Nation allow their members a conscience vote on euthanasia.

One Nation puts families first and protecting children is a high priority. One Nation will ban advertising relating to sexually explicit outdoor advertising.

I personally work in stopping prostitution and sex trafficking in Australia and internationality. I have worked with Australian Federal Police to stop Sex trafficking in Australia. Sex trafficking and sexually abuse of children is at crisis point in Australia and Qld. I have worked with cases here on Sunshine Coast. We have committed $900,000.00 to Daniel Marcombe Foundation at Palmwoods. We are committed to Daniels Law being made a law  in Qld . I personally worked with children that have been trapped in this night mare. Prostitution of any age should be illegal, we are called to make laws for Human Rights and protect people, especially children.

One Nation does protect the vulnerable and that is where laws need to be re enforced on all levels in State and Federal.

We support the preservation of the Human Rights of Queenslanders/Australians. Hate speech is already banned in Queensland/Australia. All individuals fundamental rights are protected.