Our prayers are with Orlando

Disagreement over public policy does not mean disrespect or hate for the people one disagrees with.

Sadly there are some who insist ACL’s vision for public policy is hateful of gay people.

This of course is not true.

One of the sad features of this week’s evil shooting of gay people at the Pulse Nightclub in Orlando Florida is that some have assumed that this is something groups like ACL would rejoice in.

One only has to have a look at Twitter to see such commentary.

I could think of nothing more abhorrent than rejoicing in the killing of a fellow human.

Like people of goodwill the world over, we at ACL are deeply distressed by the mass killing of innocent people.

That is why I reacted as soon as the sad news came through, saying on Twitter and Facebook that we must not allow ourselves to become desensitised to violence. 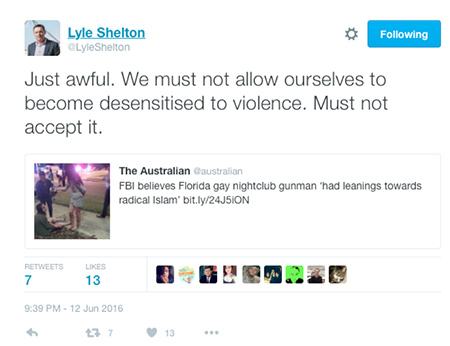 Those motivated by radical Islam have been intentional in killing Christians, Jews, Yazidis and gays alike.

What happened this week was an act of hate.

Our love for our fellow humans (regardless of any different vision of human flourishing we may have) will always mean we will stand in solidarity with those who are victims of violence.

Our prayers are with Orlando.