In December, Labor’s 2018 National Conference will meet in Adelaide to decide the party’s platform heading into the next federal election.

The party’s National Secretary has released a consultation draft of the platform and it contains some radical, extreme material.

Hidden on page 188 (clause 87), we can see the party is seeking to launch an extraordinary attack on people of faith and parents’ rights.

87. Labor opposes the practice of so-called conversion and reparative therapies on of diverse sexualities and genders and seek to criminalise these practices. 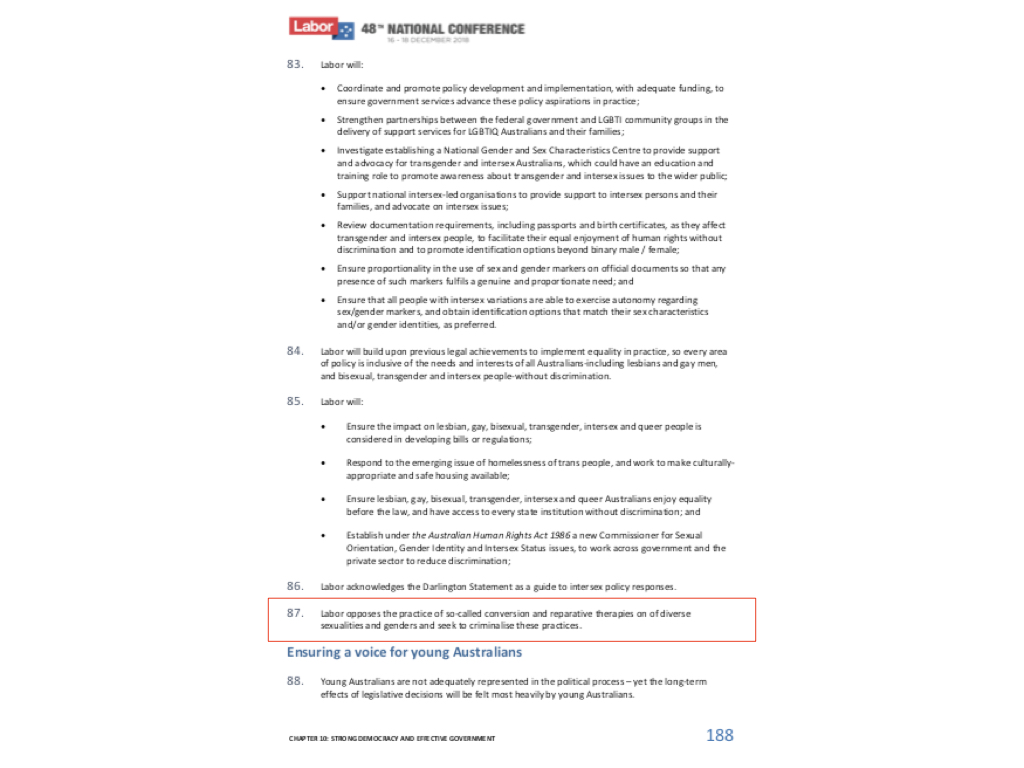 This is shocking stuff.

It means that if your son comes home one day from his Labor-sponsored ‘Safe School’ and tells you he wants to become a girl, you must support that decision and attempt to facilitate it.

Discouraging your son from transitioning to a girl, arranging for prayer or counselling to affirm his biological gender would be a criminal offence and domestic abuse under a Labor government.

Where is Bill Shorten in all of this?

Well so far he’s refusing to rule out a return of the controversial ‘Safe Schools’ program.

‘Safe Schools’ and Labor’s proposed criminalisation of counselling that affirms biology are just another attack on the rights of parents who don’t want to see their kids brainwashed by Labor’s rainbow brigade.

Let me be clear. Under Labor’s proposed new laws, Christian parents will become criminals and domestic abusers simply for affirming that their sons are boys and their daughters are girls.

Sign the petition today calling on the ALP National Conference to support a parent’s right to decide what is best for their kids.

To the delegates of the 2018 Labor National Conference.

Parents have a right to decide what is best for their children.

They have a right to object to their kids being taught their gender is fluid and not based on biology.

And if their child comes home from one of your party’s so-called “Safe Schools” wanting to transition to another gender, they have a right to affirm their child’s biological sex.

We urge you to reject the proposed changes to your national platform that would seek to criminalise parents for wanting to affirm their child’s biological sex.