Storm in a beer cup: intolerance revealed as Bible Society tries to “keep it light”

The Bible Society’s “keeping it light” video didn’t even offer an opinion on whether or not marriage should be redefined in law.

Wilson, an openly same-sex attracted man, spoke in favour of redefining marriage and Hastie, an unashamed “Bible reading” Christian spoke for retaining the definition of marriage.

Moderated by Matt Andrews, the short video was simply designed to showcase the Biblical virtue of disagreeing agreeably as part of the Bible Society’s 200th anniversary celebrations. The issue being discussed was immaterial as the Bible Society has not been a participant in the political debate.

To the credit of both Parliamentarians and the Bible Society, good natured and even at times humorous civility was achieved.
But so toxic is this debate that a vile Twitter campaign erupted with the hashtag #boycottcoopers forcing the South Australian brewer to distance itself from the video.

Now this is all too real for the team and me at Australian Christian Lobby.

Almost every time we hire a venue for a conference or event, a social media campaign erupts calling us bigots and worse, designed to have us kicked out.

Yes, Australia is a free country and people are welcome to use consumer boycotts as a tactic to exert political pressure.
We do the same with advertisers who sexualise children, for example.

But the difference is the tone and toxicity expressed by a large number of those, including leaders, from the LBGTIQ activist movement.

A quick scroll through the #boycottcoopers hashtag on Twitter revealed many of the same vicious people who troll me.
Michael Barnett (Twitter handle @Mikeybear), for instance, was instrumental in spooking Price Waterhouse Coopers last year because one of their senior partners was a board member of ACL.

Barnett re-posted on twitter a social media rant from one of his friends, Rodney Chiang Cruise of Gay Dads Australia, calling the Prime Minister a c…..
Barnett made sure PwC saw this by including their Twitter handle in the post.

PwC blinked and ACL’s board member felt he had no choice but to resign.

We were bombarded with some of the most foul written material I have ever seen, describing everything from paedophilia to bestiality.

Hunt organised a small protest at ACL’s annual conference last year and sought to disrupt it before security removed him.

He also led the charge to have a marriage coalition meeting that ACL was a part of thrown out of the Mercure Hotel at Sydney Airport.

Staff received threats of violence and even death threats and leaders of the same-sex marriage movement, when asked by The Australian newspaper, declined to condemn these tactics.

If a Christian academic was involved in this sort of political activity for the pro-life or pro-man-woman marriage movements, I wonder how long his or her tenure would last.

This brings me to Bill Leak, much loved cartoonist at The Australian, who died last week of a heart attack, aged 61.

I don’t know where Leak stood on the substance of redefining marriage.

But he could see straight through the “love” and “tolerance” brigade who are pushing for the law on marriage to change.

With almost every leader, corporate business and institution capitulating before the rainbow political flag, Leak used his cartoons to expose this movement’s illiberalism.

“Safe Schools” was not safe from his wit, showing children who could barely read having to sit through radical sex education classes about 'penis tucking'.

The Mercure Hotel incident obviously impacted Leak. After the story broke on the front page of The Australian, he used damning wit to draw a bunch of jackbooted storm troopers wearing rainbow coloured tunics. 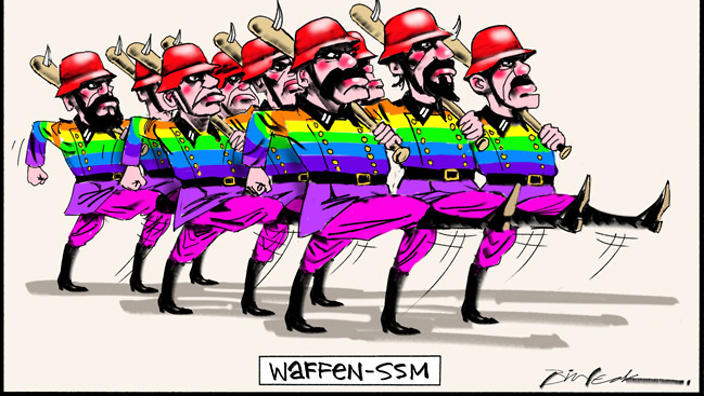 It is confected outrage to say that such satire is comparing same-sex marriage activists to murderous Nazis. No one is suggesting that, least of all Leak.

But it is fair to compare their totalitarian impulses to expose intolerance and Leak did this fearlessly.

If the Bible Society ever again dips its toe into the marriage debate, it won’t be the third-party product placement the political activists go after.

It will be the Bible itself.