The tools we need to speak up for marriage

Mohler’s claim is a big one but it carries weight coming from the president of the Southern Baptist Theological Seminary.

One of America’s leading public Christians and recognised by Time Magazine as a leader among evangelicals, he has just published his own book about the same-sex marriage crisis entitled We Cannot Be Silent.

Until recently, there have been few Australian voices resisting this cultural tsunami and the foaming rainbow wash sweeping everything in its path.

It has fallen to a humble Toowoomba-based family GP, my friend Doctor David van Gend, to pen what is a damning indictment of the idea of redefining marriage in the Australian context.

Stealing from a Child – the injustice of ‘marriage equality’ is a very provocative title. 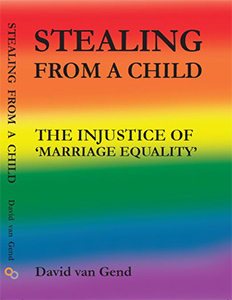 Doc, couldn’t you have toned it down a little, I wondered.

But the leaders of the successful Irish campaign to redefine marriage admitted in their book, Ireland Says Yes, that our side’s concern for the right of children to be allowed to know the love and nurture of both their mother and father, wherever possible, was their “soft underbelly”.

Australian same-sex marriage activists know this and that is why they are at pains to divert the argument away from the rights of the child and keep it focused on the “loving couple”.

It is this adult-centred approach to marriage that Dr van Gend challenges.

“Think of the child” is his refrain, a thought totally missing in this age where truth is relative and we have lost our capacity to reason.

Emotivism and story trumps facts and logic as Australia sleep-walks into the most radical social and cultural change of a generation.

Such is the inability of the fourth estate to question the assumptions of same-sex marriage ideology, that on one hand activists assert couples are the only ones affected by the proposed change but on the other they parade what they call “rainbow families” through Parliament House to convince MPs the kids are ok.

Van Gend’s book calls them out and says they can’t have it both ways.

This is not about questioning anyone’s ability to parent. But it is asking the inconvenient and obvious question about the place of mothering and fathering in our society.

The demand for ‘marriage equality’ must be considered in the light of the inequality it creates for others, particularly children who will be forced to live a motherless or fatherless existence.

And this, not because of tragedy or desertion, but because public policy decreed it so.

Activists point out that this is already happening but don’t attempt to defend the ethics of deliberately requiring a child to miss out.

But what is not happening in Australia and represents one of the next prizes sought by rainbow activists is commercial surrogacy.

Our prohibition on this will be impossible to sustain if marriage is redefined in law.

This is because marriage is a compound right to found and form a family. Two men cannot do so unless there are women’s wombs freely available for rent and women’s eggs available for sale.

And our efforts to put the genie of anonymous sperm donation back in the bottle will also fail if marriage is redefined.

That we have to be reminded of the basics of baby making shows how far society has slipped. As van Gend points out, a baby is made from a double helix with one strand from her mother and one from her father.

But while many typically selfish Australians will be unmoved by the ethical minefield around assisted reproductive technologies that will be turbo-charged if the marriage law is changed, van Gend’s book canvases the plethora of other consequences unleashed.

One that might move Australians out of their ambivalence is an obvious consequence of removing the gender requirement from marriage.

Believing they had substantively already won, activists started rolling out the so-called “Safe Schools” program which teaches children their gender is fluid.

Chapter 5 is entitled “LGBTQ sex education at your ‘safe school’, blowing away the myth that same-sex marriage ideology has no consequences.

The final section of the book outlines the very real threats to freedom of speech, association and religion.

And in a real life demonstration of this, Stealing from a Child almost didn’t’ make it off the press.

The day before the book’s first public launch, the printers OpusGroup, reneged on their contract citing the controversial subject matter of the book.

The launches in Brisbane, Sydney, Melbourne and Hobart have so far met with highly positive feedback, if you're interested in attending, the Adelaide, Perth and Canberra events are still open for registrations.

Dr van Gend’s book is a tour-de-force. It will be mocked and ridiculed by the other side but few, if any, will seriously engage his argument.

Van Gend has given us the logic and the vocabulary to respectfully argue with confidence for preserving the most important civil society institution available to a child – her parent’s marriage.

Stealing from a Child is available at Koorong or online from Connor Court for $29.95.

Last Thursday the members of the 41st WA Parliament were sworn in.