Did you hear how Volley shoes this week defended their sexually explicit advertising campaign?

When a complaint was made about their highly explicit marketing campaign, Volley responded:

"It is important to note that the Volley campaign is all about the celebration of sexual expression and the freedom to love whoever we want as individuals."

Volley sells shoes, yet the campaign is about the celebration of sexual expression?

Time and time again advertisers over step community standards in the pursuit of profit. Exposing children and the wider community to sexualised content is no way to promote sports shoes.

It is time we speak out against overtly sexual advertising campaigns that care nothing about the innocence of our children.

Community standards should be respected and the videos and images in this marketing campaign have already been determined to FAIL Section 2.4 of the Advertiser Code of Ethics.  Yet they continue to be used on Brand Collective’s Volley website. (following images have been censored) 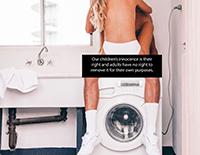 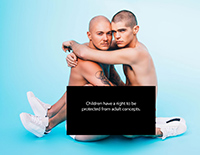 It is clear the industry watchdog, the Advertising Standards Board, is not effective in protecting our children from sexualised advertising.

Add your voice to this campaign. Write to the Federal Communications Minister, Senator the Hon Mitch Fifield and protest the ineffectiveness of the Advertising Standards Board.

Let’s make a difference in the lead up to Safer Internet Day on Tuesday 7 February 2017.

Background: What the Advertising Standards Board decided in 2016

The Advertising Standards Board found this campaign breached the Advertiser Code of Ethics last year.

"The Board noted that in some scenes in the advertisement women are shown wearing only underpants and shoes and considered that the level of nudity is explicit. The Board noted the Practice Note to Section 2.4 which provides: “Full frontal nudity…is not permitted” and considered that the scenes showing the full breasts and nipples of female models are a clear breach of this Section of the Code."

"The Board noted in particular the focus on a woman’s breasts when she is on a swing, the close-up of a woman’s bottom when she leans in to a car, and the lingering shots of couples embracing, and considered that this focus increases the impact of the nudity and gives the advertisement a sexualised tone.

The Board noted that the ....advertisement showing high levels of nudity and sexualised activity has no relevance to the advertised product and is not something most customers of this type of shoe would expect to receive. Overall the Board considered that the advertisement did not treat the issue of sex, sexuality and nudity with sensitivity to the relevant audience of customers purchasing shoes.

Despite this ruling, Brand Collective continue to ignore concerns raised and thumb their noses at the Advertising Standards Board, who have no power at all to enforce their rulings.

Please write to the Federal Communications Minister below and protest the ineffectiveness of the Advertising Standards Board.

Suggestions for your complaint

Take a moment to submit a complaint below in your own words.