Why the Gospel should move us to change the world

As 2018 gears up, Christians are reflecting on the changing environment we are in.

An important book of 2017 grapples with the growing cultural and political hostility towards followers of Jesus.

Strangers in a Strange Land is the work of Charles Chaput, the Roman Catholic Archbishop of Philadelphia in the United States.

He is one of my favourite Christian thinkers when it comes to politics and culture.

While the subtitle of the book is “living the Catholic faith in a post-Christian world” the content applies equally to all believers.

Chaput does not beat around the bush when it comes to analysing the place of Christianity, as seen by the elites.

“People who hold a classic understanding of sexuality, marriage and family have gone in just 20 years from pillars of mainstream conviction to the media equivalent of racists and bigots,” Chaput writes.

With regard to same-sex marriage he points out that it only took a decade for a large swathe of the American population to junk two millennia of Christian teaching on marriage and sexuality.

Despite being told there were “no consequences”, we are seeing this pillar to pariah scenario playing out in Australia.

The victors of the same-sex marriage battle from both sides of the political divide simply refused to allow accommodations for freedom of speech and just the narrowest for freedom of religion.

If your views are bigoted, why should you have free speech and religion?

This will be evidenced in submissions to the up-coming Ruddock Review of religious freedoms.

I hope you have taken the time to write – we need thousands of expressions of concern about the need to restore freedom of speech and religion.

Another concerning cultural trend is our worship of technology which has now taken us to the place where truth is seen to coincide with what is possible.

This is dangerous when applied to bioethics and gender.

We’ve entered a new dark age when the light in most people’s faces is the glow from their smartphone or tablet, he quips.

Chaput also hits out at society’s capacity for collective hypocrisy.

Charles Murray, the sociologist who wrote “Coming Apart”, and who affirms the social science consensus that children do best when raised by their married biological parents, is cited

“I know of no other set of important social findings that are broadly accepted by social scientists…and yet are so resoundingly ignored”.

Our society’s capacity for cognitive dissonance – holding two opposite things to be true at the same time – knows no bounds.

As Chaput points out, same-sex marriage-crusading companies like Apple have no compunction in making money in gay-oppressing societies like Indonesia.

Yet there is no #boycotIndonesia. Virtue signalling has its limits, it seems.

I saw some of this irrational thought and hostility last week when Victorian Senator Derryn Hinch tweeted a message to my twitter handle and his followers that his Justice Party now no longer supported the so-called “Safe Schools” program. 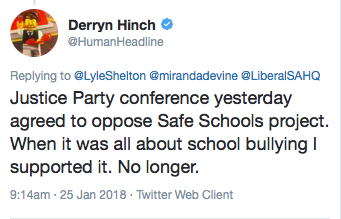 Great news! I tweeted back to him.

Because he included me in the communication, hostile people began attacking Senator Hinch on social media.

This led him to later tweet that he takes no notice of anything Lyle Shelton has to say. 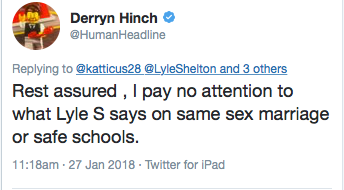 So why tweet me to let me know you now agree with me?

I guess if you are a Christian trying to shine a light on harmful social programs for children, you have to be pilloried no matter how just your cause is, even when elites finally embrace it.

In this day when our appetite for comfort and security has replaced conviction, Chaput says the church is resented because it moves faithful people to act.

Elites who reject God and the church’s vision for human flourishing hate this.

I found Strangers in a Strange Land much more fulfilling than Rod Dreher’s The Benedict Option.

While an excellent analysis of our current plight, whether intended or not, too many Christians are using Dreher’s thesis as a permission structure to withdraw from political engagement by retreating to a new form of monasticism.

Chaput’s thesis is much more compelling and hopeful, while obviously not glossing over the challenges.

We must not give in to despair because that is really pride.

And we must keep an eye on eternity because success in our life-time is not guaranteed.

“The Gospel should move us to change the world, not bless it as it is, he says.

“Our acts of Christian love make Jesus again present in the world.”