Six grassroots movement events were held during March in Wheelers Hill, Bundoora, Frankston, Chirnside Park, Werribee, and Tullamarine. It was a great joy to meet with our supporters in person – and thank you to the churches that hosted these events!

More than 200 supporters were briefed about the social and political developments in Victoria including:

All of these combined pose great concerns for all Christians, members of other faiths, and multicultural communities in Victoria.

These policies and legislations will give greater power and mandate for the LGBTIQ activists to further advance their agendas and social engineering in Victoria. If we, as believers, don’t take action now, we will soon see Victoria turned into a “Rainbow State.”

That’s why we’ve been meeting to discuss how we can make a difference in Victoria. Having a grassroots movement has proven effective during various campaigns in the past, and we believe it will be crucial for the journey ahead.

Thousands of active Christians are needed to help stand up for truth and righteousness in Victoria. And I praise the Lord for you, and so many others, who have grasped this vision and have put up their hand to help as volunteers.

One pastor brought a few people to one event, and he was so inspired, he brought an even bigger group to a second meeting! This pastor and his friends felt so gripped by the social and moral challenges that are bearing down on believers in Victoria, and they’re eager to do all they can to be a voice for truth.

May God raise up thousands more Christians like them!

We’ll soon launch a letterboxing campaign to inform the wider community about the Change or Suppression (Conversion) Practices Conversion Bill that has passed – and that could land parents in jail if they fail to affirm their child’s desire to change genders.

I hope you can be part of this letterboxing campaign. I’ll be in touch with more details in the near future. In the meantime, you can click here to sign up as a volunteer.

God has called us to be salt and light in our community. There has never been a more important time to rise up with boldness and courage to defend truth, freedom, and our children. Let’s continue to…

“Fight the good fight of the faith.” 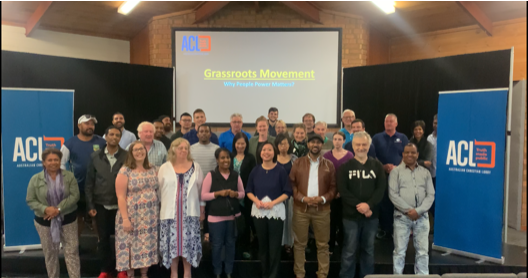