Tasmania in the news for all the wrong reasons 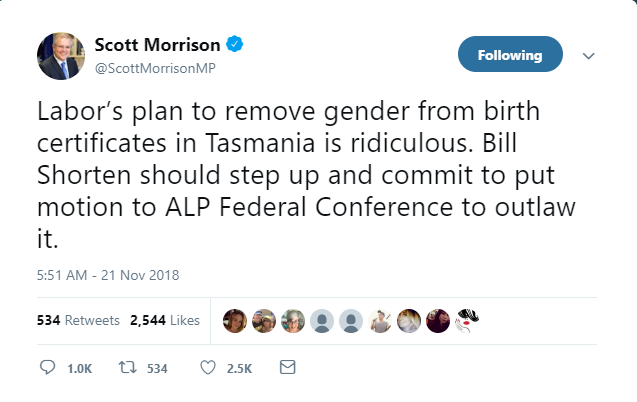 Once again Tasmania is in the headlines – but sadly, for the wrong reasons. Tasmania is leading the nation in its disregard for common sense. Why? To accommodate the perceived rights of a tiny minority.

Yes, transgender people are important and precious to God, but to throw truth and reason out the window to support their desires is not good leadership.

Some of the changes that were passed on Tuesday night thanks to Liberal Speaker Sue Hickey siding with the Labor/Green team included:

It doesn’t take too much imagination to consider the possible dangers of these changes. Yet, the public has not even been given the opportunity to provide input.

Safe spaces like bathrooms for women and girls; women’s services; women’s prisons; women’s sporting events; girl’s schools – are now all the more likely to be unsafe.

The PC craziness knows no boundaries. Transport for London has banned the use of “ladies and gentlemen” on their public announcements and the British Medical Association suggests its health professionals use the term “expectant person” rather than “expectant woman” so as not to offend transgendered people.

In Melbourne, there are already restaurants who have removed the ‘male’ and ‘female’ signs from toilets. Is it any wonder women feel less safe?

Threats of litigation for offending people by not using preferred pronouns is incredibly dangerous. Compelling people to do things against their conscience is dictatorial.  Yet this is exactly what our Anti-discrimination Act seems to encourage.

Have you noted some glaring paradoxes to all of this? On one hand, people are so intent on de-gendering society but on the other, celebrating diversity. In a culture fixated on gender equality, it now seems happy to support genderlessness. If gender is supposedly fluid, how come it’s apparently only allowed to flow in one direction?

We must stop this social experiment. What kind of world are our children and grandchildren going to have to grapple within 10-20 years’ time?

Australian Census data should not be manipulated by lobbyists

The anticipated release this week of Australia’s most important survey - the 2021 census data - is in danger of...